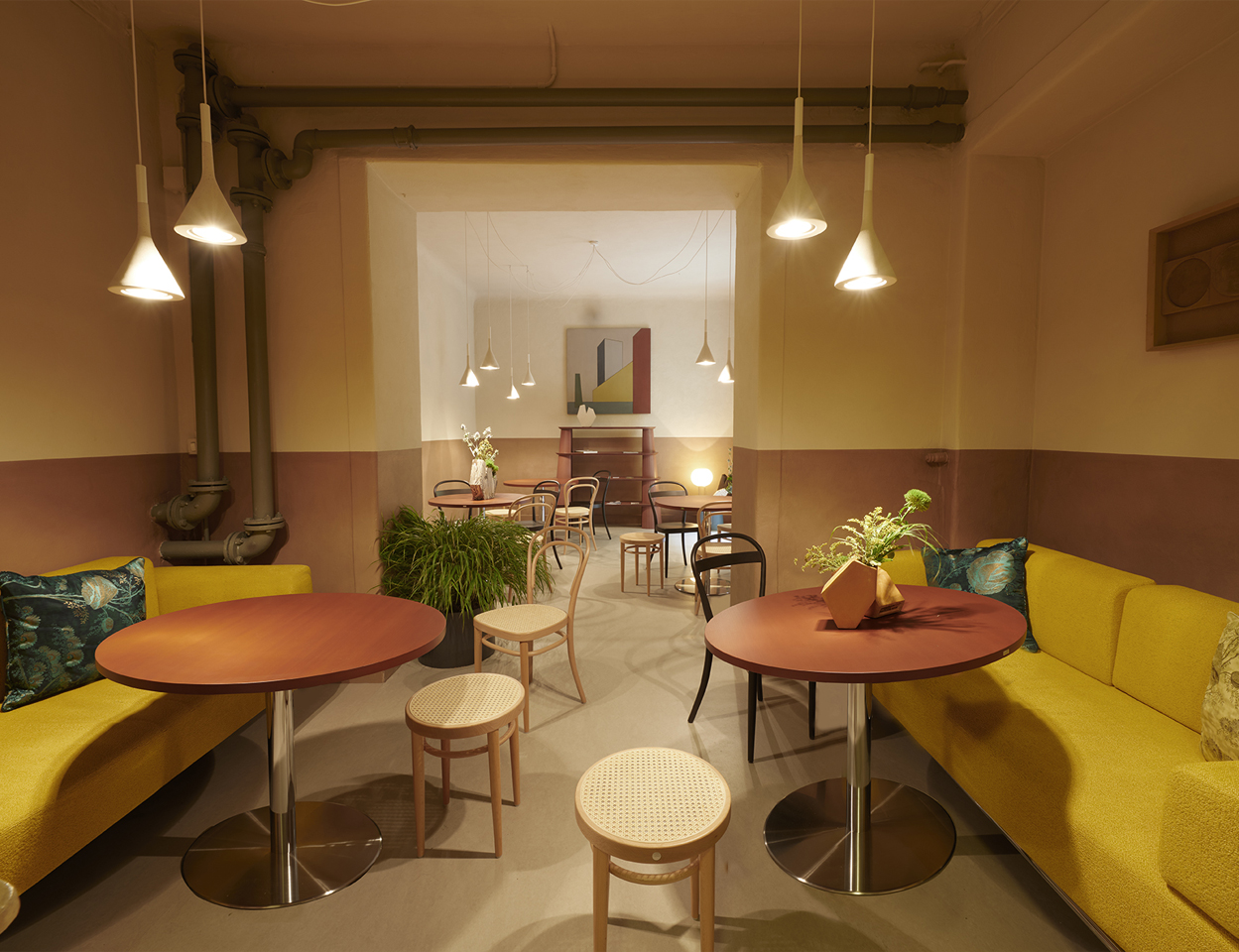 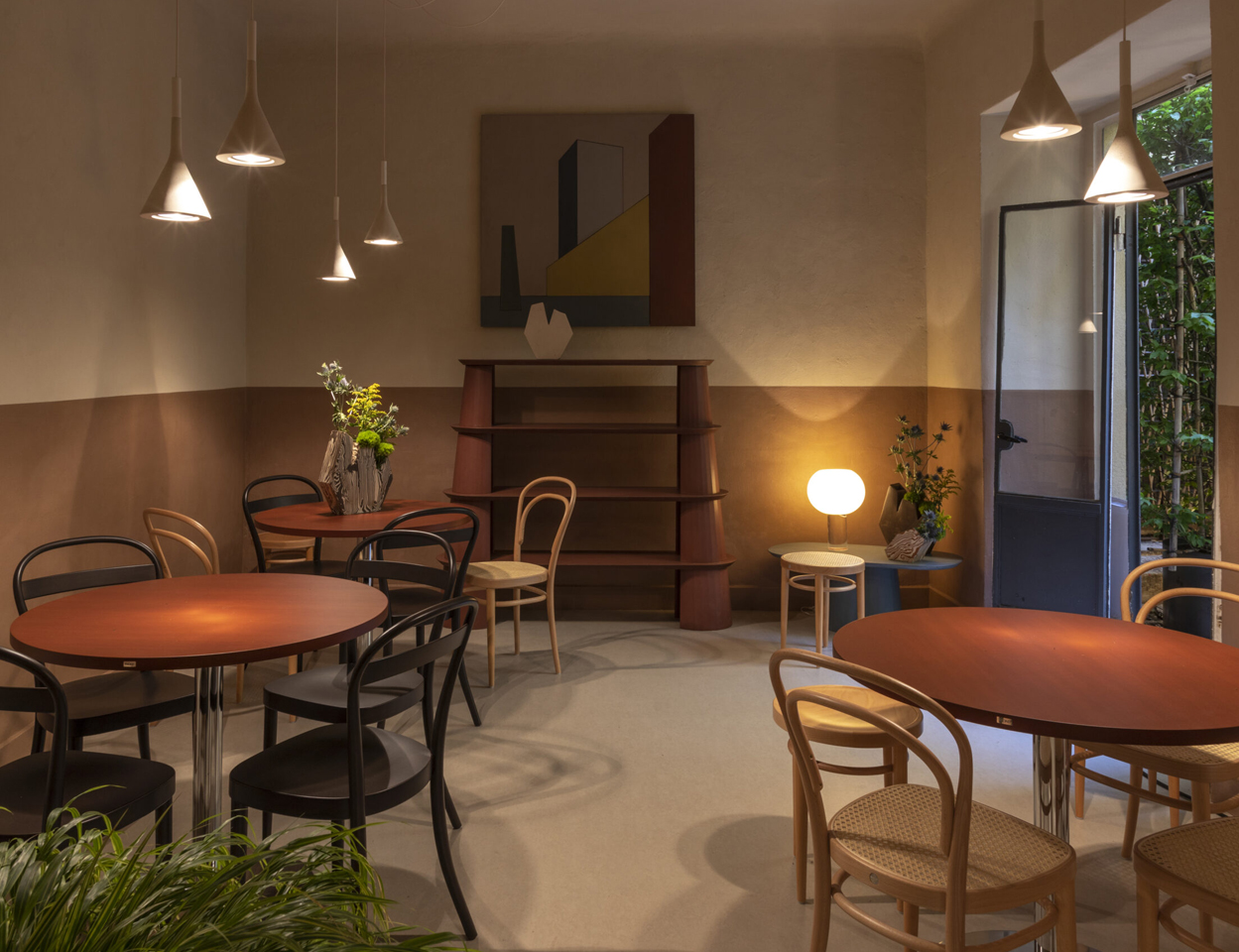 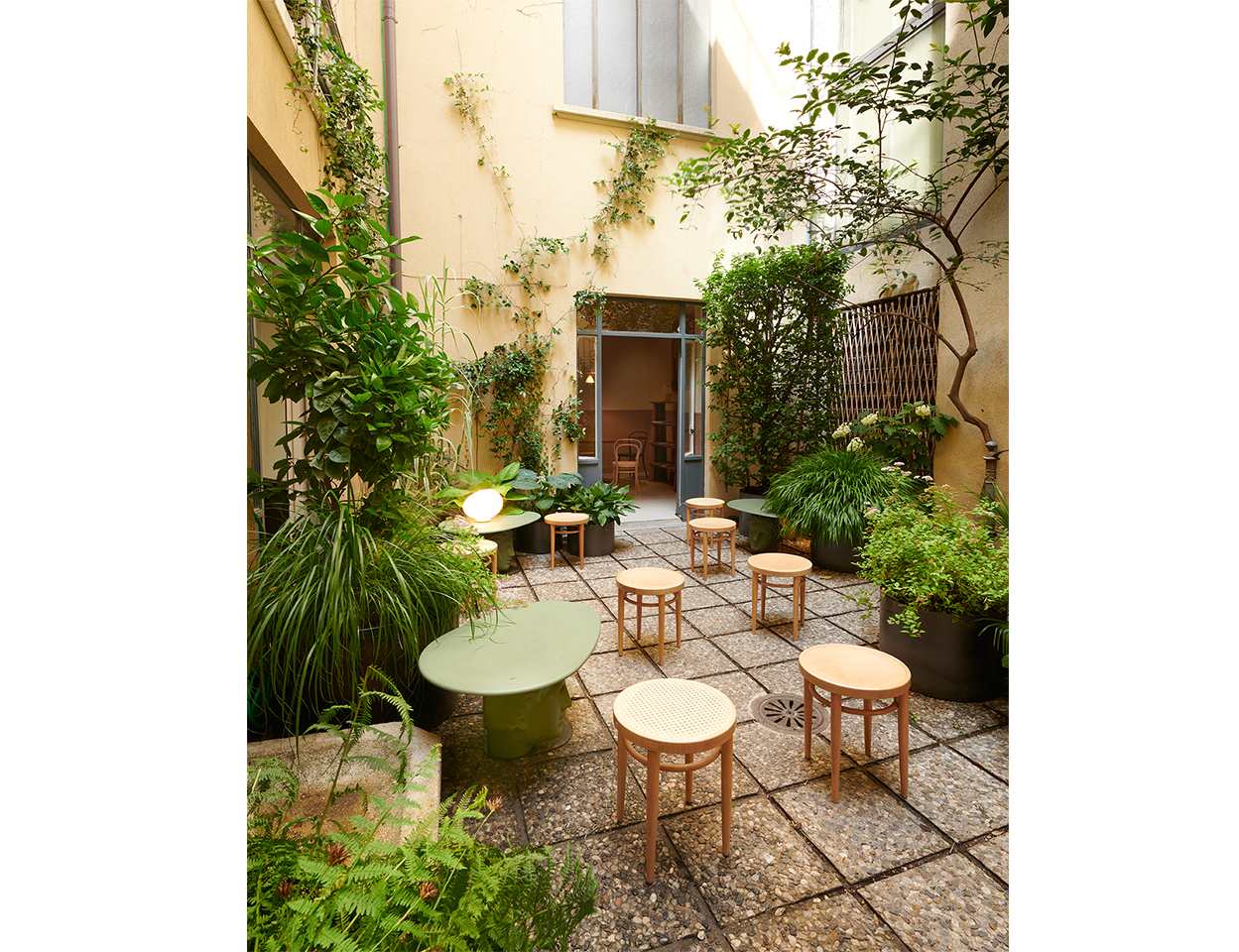 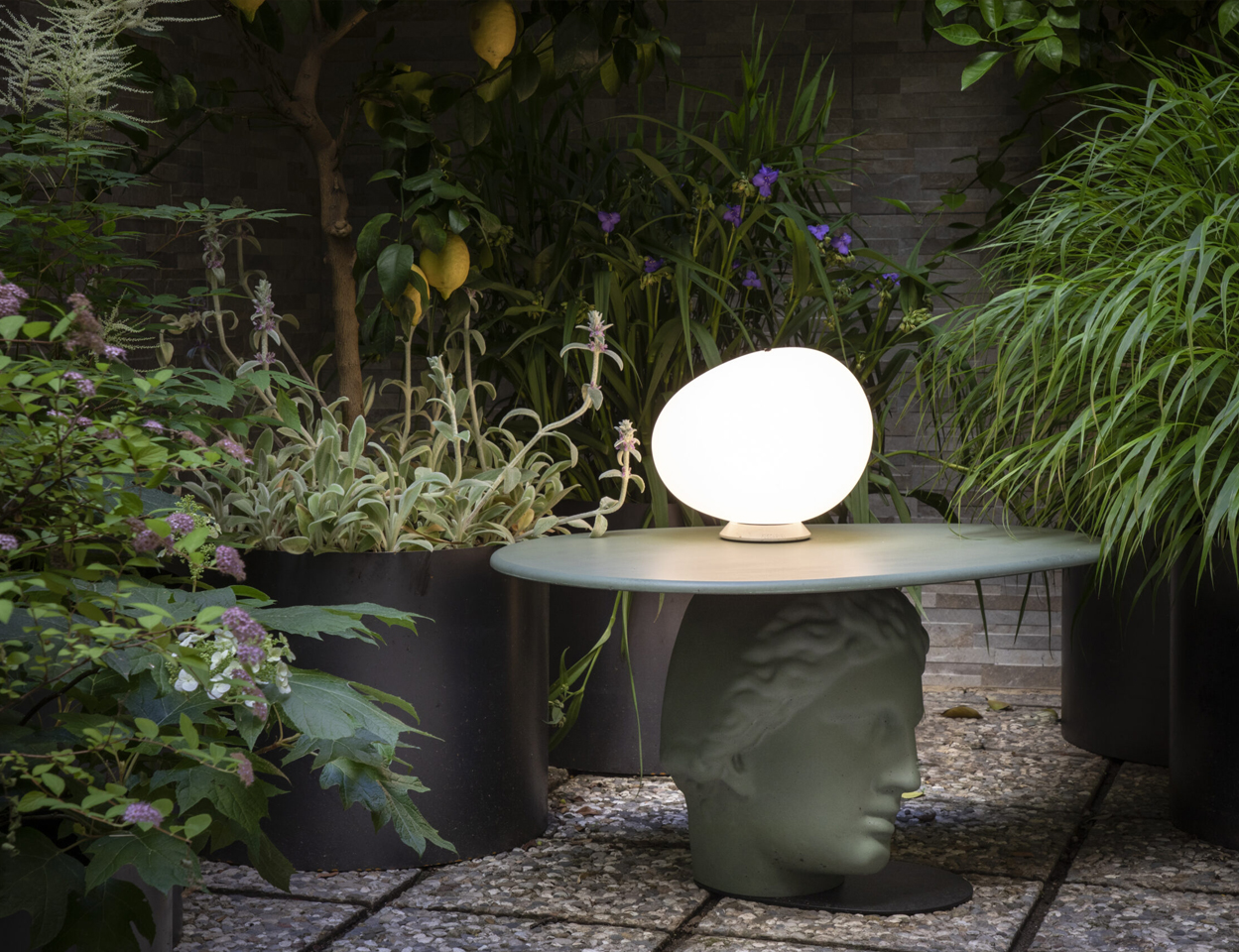 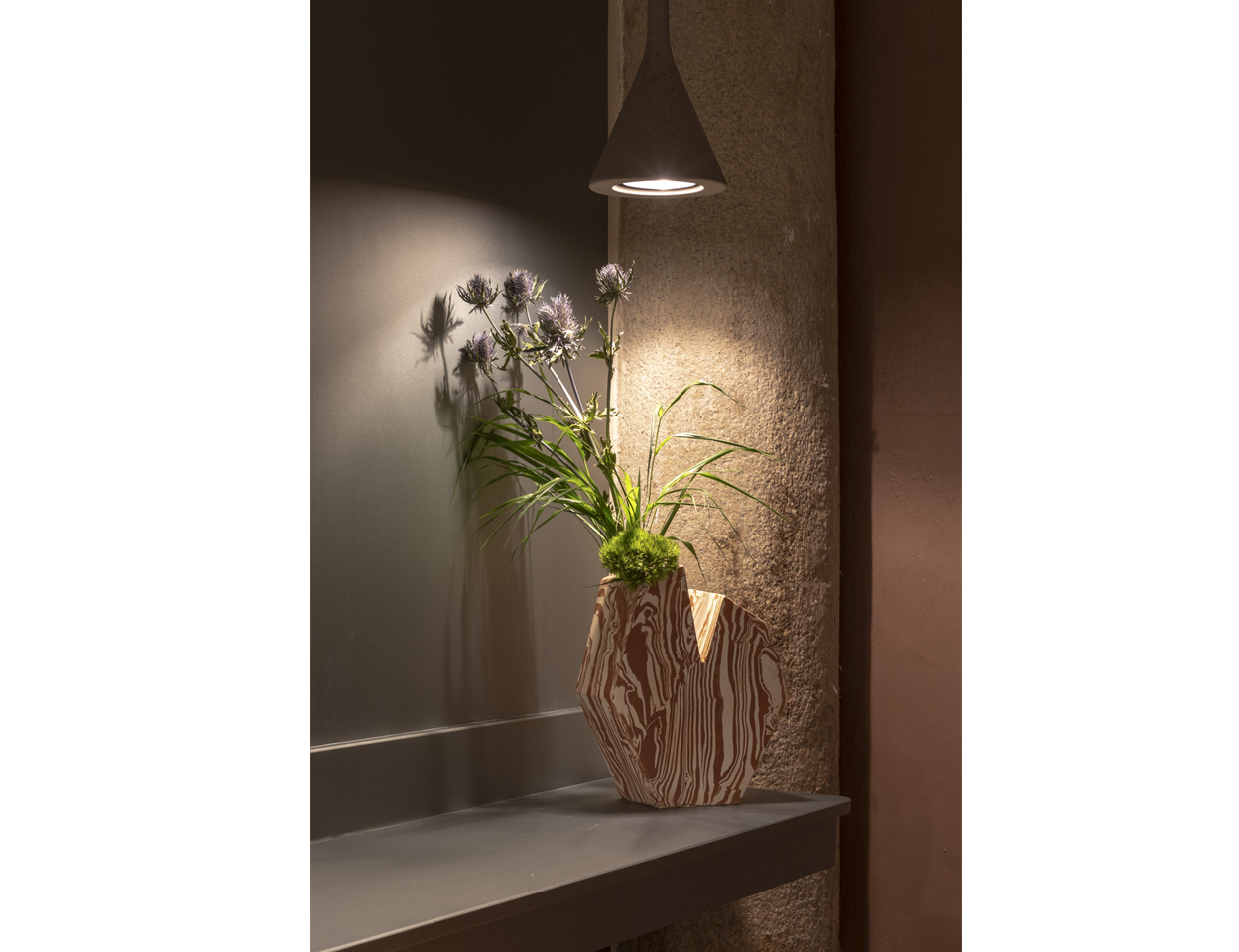 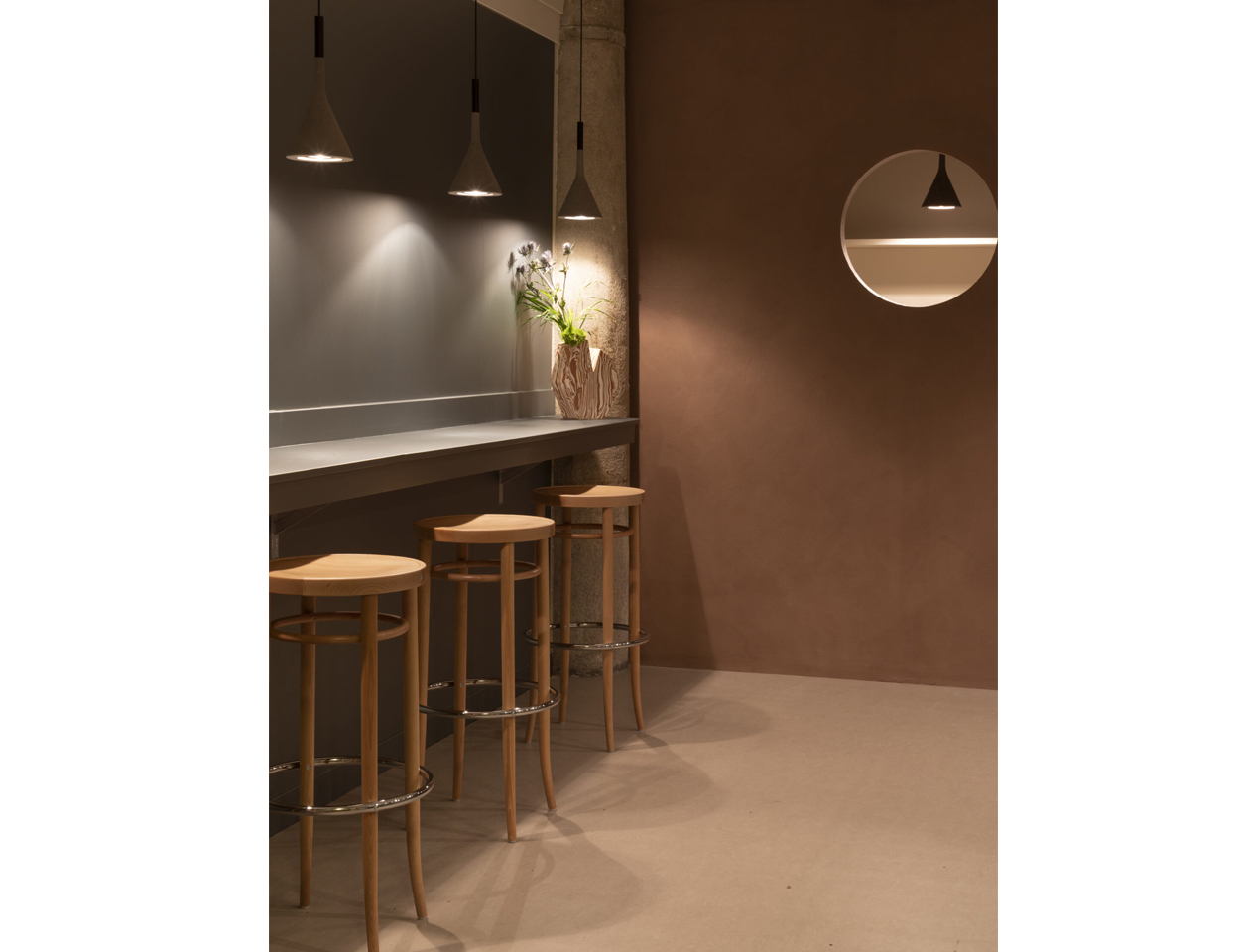 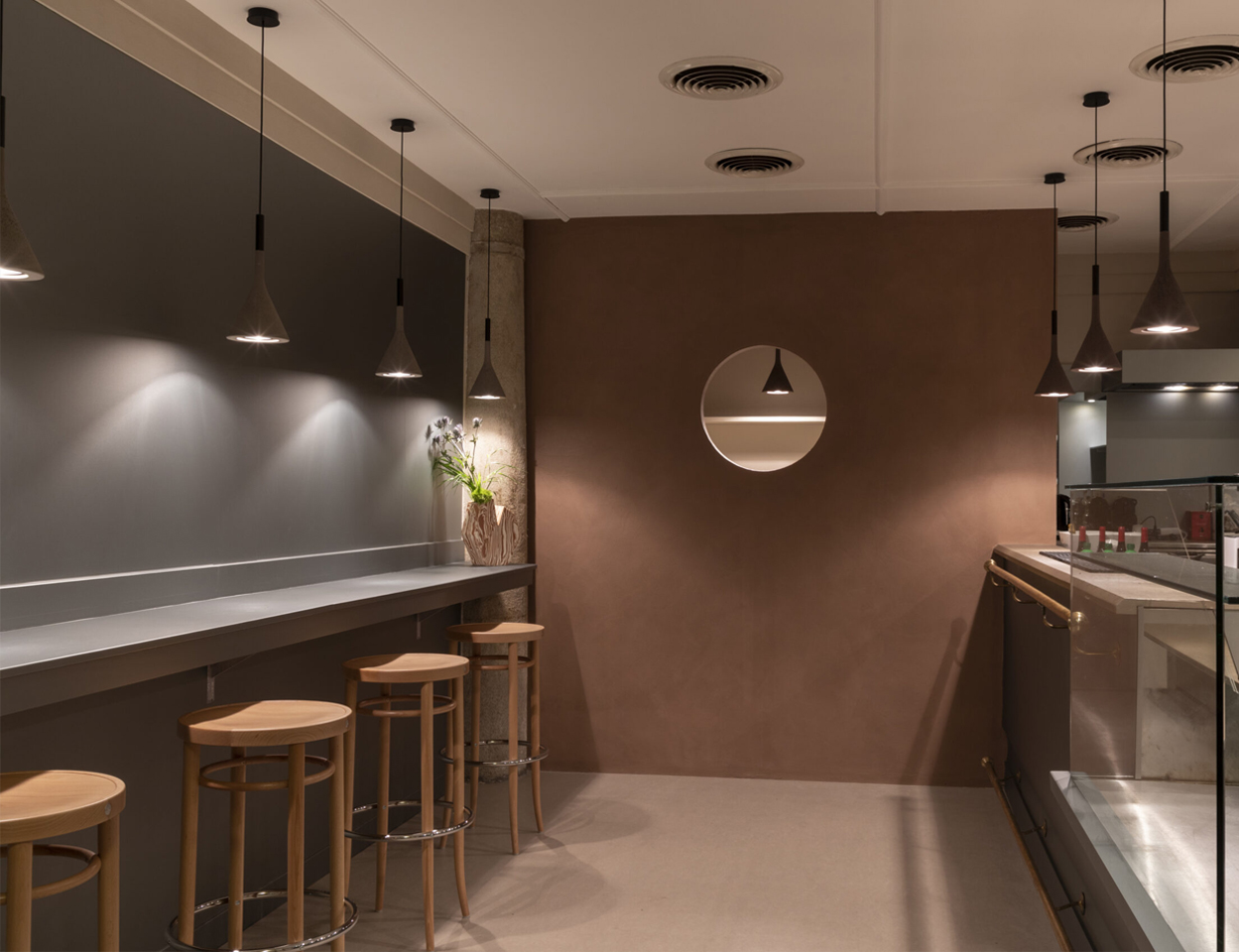 “I like to call it an “extreme makeover”, a remaking of the spaces that has sought to cover the existing with an extremely interesting exercise, from the restoration of the bar to the creation of an area to eat in, passing then to the design of a lounge area that overlooks the courtyard to create a sort of urban oasis…Starting from the collaboration with 3M, we decided to cover some of the Caffè’s original surfaces with a special adhesive film, articulated in two shades with a brilliant effect — metallic pink on the horizontal plane and an iridescent green/celeste for the vertical one. Having no windows, I favored textures that would somehow vibrate to create an ever-changing play of light. In doing so, we will “pack” the architecture. The remaining part of the Circolo Filologico, beginning from the entrance, will then be renewed with the raw earth products of Matteo Brioni, reasserting the particularity of natural materials and creating a much more muffled, warm and metamorphic space than the pre-existing setup.The Caffè’s rooms will also have clay finishes on the walls but we will include burgundy-colored panelling and a range of Thonet furniture, including the S 5000, our sofa system, and customization for the iconic No. 14 chairs, once again in a deeper burgundy color. To embellish the spaces, there are lamps by Foscarini and fabrics by Métaphores, where unexpected flashes of yellow and long strokes of pomegranate will take to cushions, upholstery and curtains, and some concrete furniture and textural moodboards designed for Forma&Cemento. In particular, the latter, hung on the wall as 1x1m paintings, will visually and tactilely recall the infinite possibilities of color through the conceptual reproduction of a metaphysical world…Finally, because we couldn’t skip over terracotta, we designed these two-dimensional vases for FangoRosa named after three Italian volcanoes — Etna, Stromboli and Vesuvius — characterized by organic silhouettes and lava patterns that suggest both a triptych composition with nothing else added, or the inclusion of floral bouquets. Like small chimneys, they will pop up together or separately on tables and shelves throughout the show. The general idea of this place was to make it welcoming as if it were a house that, once outdoors, would trace the intimate form of a green oasis. For the courtyard, we worked with Vivaio Fratelli Leonelli, imagining a Mediterranean garden, so lemons, kiwis, rosemary and lavender, to stimulate all the senses and highlight the aromas of the landscape. This outdoor space will then be filled by Betti coffee tables, the Neoclassical head I designed for Forma&Cemento, paired with the traditional Thonet stools.” MRI

The project is part of Design Variations by Mosca&Partners, photo Ruy Teixeira